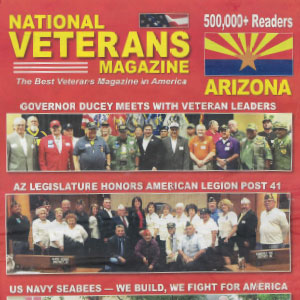 The most recent issue of National Veterans Magazine included an article about Marley Park’s Veterans Commemorative Plaza (VCP). The VCP Committee hopes this exposure will increase awareness and in turn paver sales to support this living memorial to those who have served or are serving our country.

The only veteran’s memorial in Phoenix’s Northwest Valley honoring veterans of all five military branches, the VCP was dedicated on Veterans Day 2016. Each year, newly purchased pavers are installed on Armed Forces Day in May and Veterans Day in November.

The VCP is the brainchild of Marley Park Leadership’s Project Committee, a group of resident leaders who wanted to honor military service members who served or are serving in the United States Armed Forces.

Inscribed brick pavers surround the flagpole forming the Circle of Honor, an unbreakable border supporting our flag. These pavers are red, the pentagonal base is white and the sky is blue, representing the colors of the American flag.

Visit the VCP at the southeast corner of Founders Park Boulevard and Pershing Street in Marley Park. For more details about the VCP or to purchase your paver, visit: marleypark.com/vcp