Here in Marley Park we’re proud to have a group of boys committed to giving back to others through community service projects across Arizona. Boy Scout Troop 194 gave more than 250 hours in community service last year alone.

Many of their service projects helped preserve Arizona’s natural resources through conservation efforts in the Kaibab and Tonto national forests. Some of those hours were given right here in the Valley, including an Eagle Scout project by Nick Beach at Wild at Heart, a bird rescue and rehabilitation center in Cave Creek. 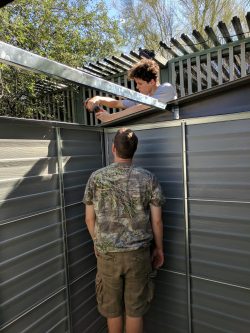 In early winter Nick planned, organized, and led a group of scouts in building a storage facility for the non-profit organization. The facility was needed to protect the feed and supplies used to care for rescued birds, many of which have been brought to Wild at Heart after being injured by humans. Nick completed his project over a couple of weekends, pouring the concrete base the first weekend and assembling the storage unit the second.

This past spring, scout Ashton Anderson completed his Eagle Project at Crossroads for Women. Ashton planned, organized, and supervised the construction of permanent horse pits at the facility. The first weekend was spent preparing the site for construction; the second weekend they brought in the sand and assembled pits. The pits were already being used even before the scouts were done cleaning up.

The troop has a goal of more than 300 service hours this year. With several Eagle candidates in the troop now, they are looking forward to a few more Eagle projects before the year’s end. One scout is currently working with A Soldiers Best Friend, an organization that trains canine assistants for veterans. Another scout is working with the White Tanks Regional Park to find projects that fit the requirements for an Eagle Scout.

You can help support Boy Scout Troop 194’s community service projects during Marley Park’s Star-Spangled Celebration next month. Troop 194 will be cooking up tasty pancakes for our Patriotic Pancake Breakfast. Stop by the Heritage Club July 4 between 7:30 and 10:30 a.m. for breakfast and make a minimum $5 donation (per meal). Your donations will help the troop complete their Eagle Scouts projects this year.