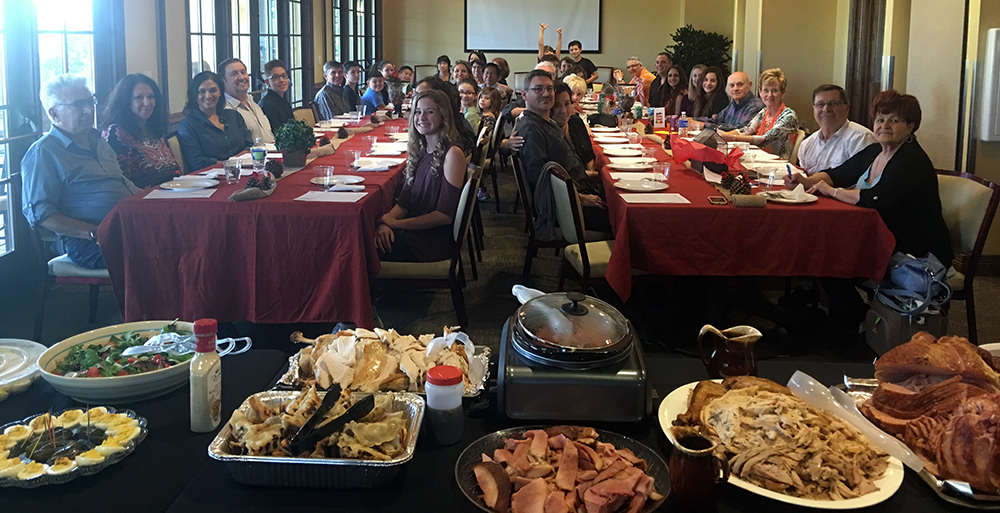 Marley Park residents annually host a Thanksgiving celebration at the Heritage Club. All residents are invited. This year 48 residents and friends attended. Resident Jason Griffin shares his memory of this year’s event.

There were so many good things about Thanksgiving Day, where do we begin? First of all, one of the major highlights was the atmosphere of our dinner. It’s was warm, friendly and inviting. As you entered the room, one would think that the people there had known each other quite well, however the miracle of the atmosphere is they came in as total strangers and left as friends, making promises to meet again next year!

The second thing that made the day great was the food. As people arrived, the table got more colorful. As the morning went on and as noon began to roll around, the smells of Thanksgiving filled the room. The taste of Thanksgiving was even more divine with all of the ham, turkey, roast beef, pot stickers and other fixings to weigh down the plate. It was one of those days that you wished you could have eaten laying down so you could eat a little more. When the first plate was empty and in the trash, your nose picked up a scent to the dessert table. Apple, pumpkin, cherry and blueberry pies, cheesecake, cupcakes, cookies and of course ice cream and whipped cream!

The third great thing about thanksgiving was it truly was thanks giving. Total strangers wrote to tell of all they were thankful for. As the pages were read you could hear the stories that were untold through words that expressed heartfelt gratitude for life, family and freedom in many different ways.